By Ed Cara for Gizmodo 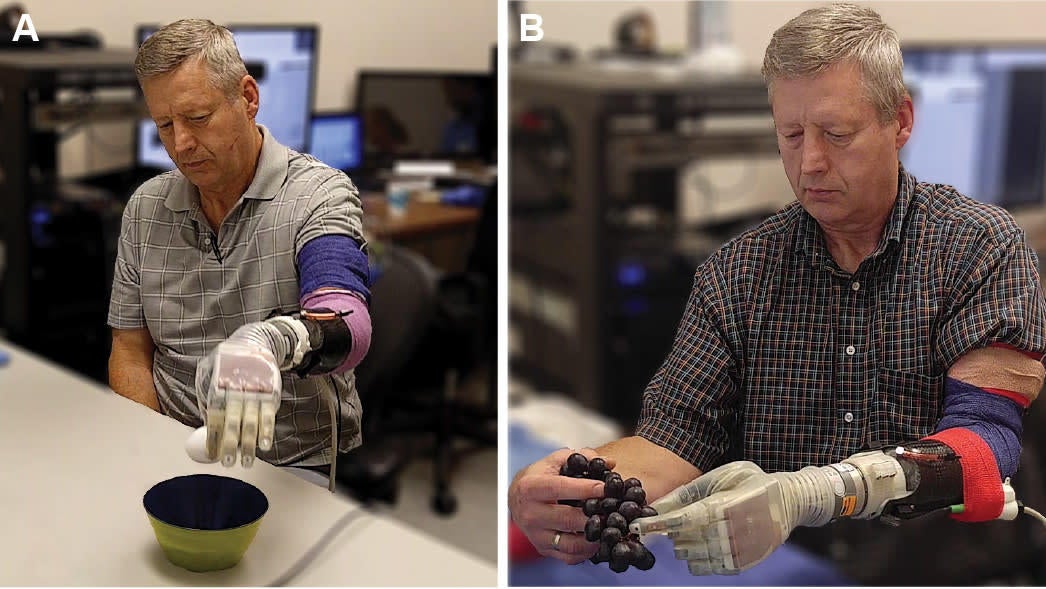 Perhaps one of the profound yet underappreciated aspects of being alive is the ability to reach out with your hand and feel the world around you—whether it’s fresh-cut grass or the face of a loved one. For people who have lost a hand or arm, prosthetics may restore some functioning, but not the sense of touch itself. But scientists at the University of Utah say they’ve created technology that can return some degree of feeling for people with amputations.

There has been work elsewhere in creating prosthetics capable of providing sensation. But according to the team, the sensations people have while using them are limited and imprecise. They claim their work comes much closer to mimicking how our hands feel and sense the world around us.

The technology is the result of a collaboration between several institutions, not just the University of Utah, according to Gregory Clark, a biomedical engineer and neuroscientist at the university. One major contribution by the university’s researchers was the development of the Utah Slanted Electrode Array (USEA). The USEA, Clark told Gizmodo, provides an interface between a prosthetic hand and the user’s remaining sensory and motor nerves in their arm; these nerves and the person’s own thoughts then help operate the device.

“He reached out, putting his two hands together, moving them and rubbing them against one another, feeling with his prosthetic hand as if it were almost real, and feeling perhaps almost whole again, for the first time in nearly 15 years.”

This happens through the surgical implantation of hundreds of electrodes directly next to the nerve fibers. They can “record from (listen to) or stimulate (talk to) small subsets of nerve fibers very selectively, and reasonably comprehensively,” Clark explained via email. This allows for a wide range of specific sensory and motor signals to be received and sent back between the prosthesis and the nervous system.

“Metaphorically, having electrodes inside the nerve rather than outside is like having intimate and different conversations with small sets of selected people that you’re sitting close to, rather than shouting from outside a stadium so that everyone inside hears much the same message, and hearing only a garbled roar of the crowd in return,” Clark said.

In 2016, Clark and his team recruited the aid of Keven Walgamott, who lost his hand and some of his arm in an accident around 15 years ago. Walgamott was implanted with the USEA, which was connected to an advanced prosthetic arm developed by the company Deka and named LUKE in honor of the prosthesis that the Luke Skywalker donned in the Star Wars series. Then over the course of 14 months, Walgamott traveled to the university to test out the arm in their lab.

The final results of the team’s project with Walgamott were published Wednesday in Science Robotics.

When the interface was turned on (referred to as ‘stimming’ by Walgamott), he was not only capable of feeling the things his LUKE hand touched, but could distinguish between touching something soft or hard. That added sensitivity made it easier for Walgamott to pull off surprisingly complex movements, like picking grapes, delicately lifting a fragile box, or stuffing a pillow into its case. But most significant was how Walgamott reacted emotionally while using the LUKE.

When asked if there was anything else Walgamott wanted to do with the prosthesis at the end of one session, according to Clark, he simply said, “I want to clasp my hands together.”

“And that’s exactly what he did. He reached out, putting his two hands together, moving them and rubbing them against one another, feeling with his prosthetic hand as if it were almost real, and feeling perhaps almost whole again, for the first time in nearly 15 years,” Clark said.

The team’s prosthesis, while certainly impressive, is still an imperfect imitation of the human arm and hand. For one, there are orders of magnitude more nerve fibers in the arm than there are electrodes used in the USEA. But a weaker facsimile of feeling would still be invaluable to patients, Clark noted. The device could even tamp down the frequency and severity of phantom limb pain experienced by many, as it seemed to for Walgamott.

“We can’t yet fully replicate nature’s rich repertoire of sensation and perception,” he said. “But we can do far, far better than occurs when there’s no sensation at all.”

A major next step for the team is to improve on the design. They hope to create a portable version of the prosthesis, one that would be used at home. They also want to switch entirely to wireless implants for the interface, which would not only be less cumbersome for the user, but reduce the risk of infection or breakage. They plan to start at-home trials within the next few months, provided that the Food and Drug Administration approves them.

It’ll take years at least before these devices could be commercially available, though, even if these trials and others go off without a hitch. But that’s still enough time for people living with limb loss today to someday benefit from these advanced and more naturalistic prosthetics, Clark noted.

“To riff on the Luke Star Wars theme: That’s a new—but quite realistic—hope,” he said.

Read the article on Gizmodo.

Blackrock Microsystems, based in Salt Lake City, Utah, was founded in 2008 and is the world’s leading provider of technology in the neuroscience, neural engineering, and neural prosthetics space. The company’s technology is at the core of worldwide innovations in Brain-Machine Interfaces (BMI/BCI), implantable bionic technologies and epilepsy diagnostics. Most impactful implantations of the Utah Array have been in some tetraplegic individuals from University of Pittsburgh’s Nathan Copeland, who controlled a prosthetic arm to fist bump US President Barack Obama in 2016; Ohio State University’s Ian Burkhart who is learning to control an automobile, and CalTech’s Nancy Smith who is learning to play a virtual piano. Seemingly easy tasks, all have used the Utah Array to translate their thoughts into action to restore function.