Man with brain implant on Musk’s Neuralink: “I would play video games” 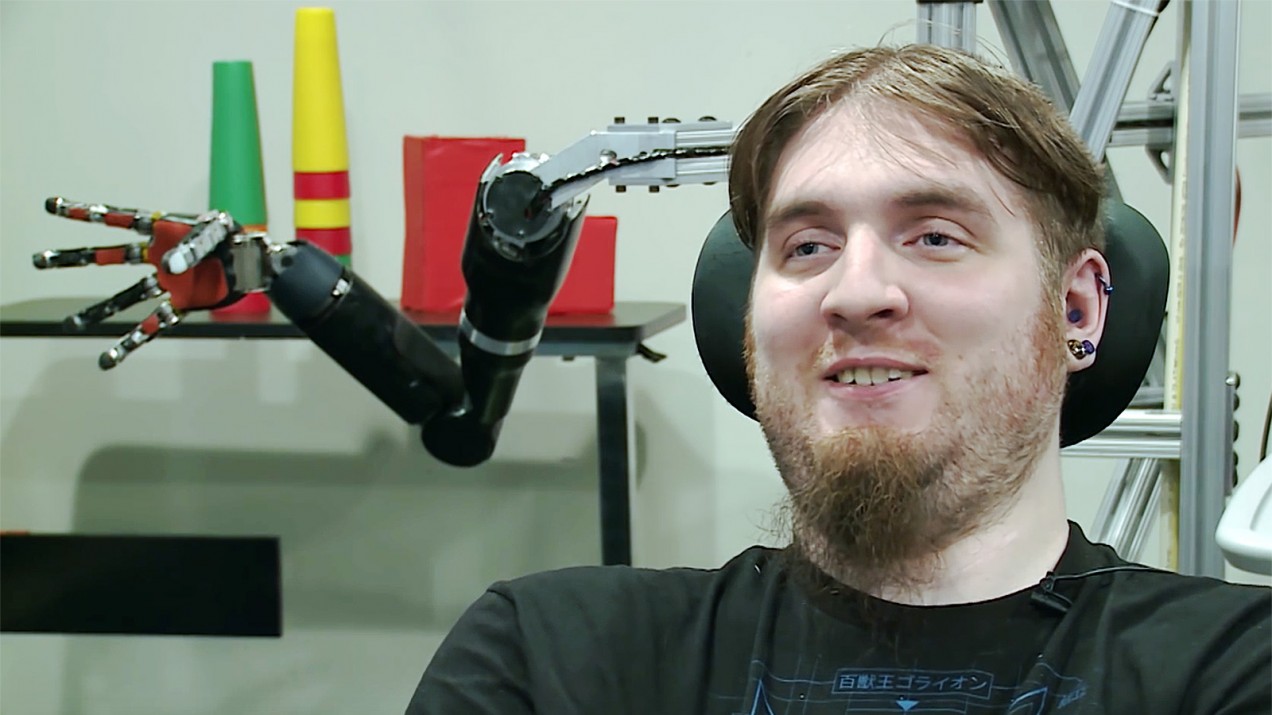 Nathan Copeland was one of the first people fitted with a brain implant after an accident left him paralyzed.
UNIVERSITY OF PITTSBURGH MEDICAL CENTER

Nathan Copeland, a pioneering research subject, talks about his brain-computer interface and why he’s excited for Elon Musk’s.

Neuralink, a company bankrolled by billionaire Elon Musk, this week unveiled a new design for a brain-computer interface that it had tested in animals. Nathan Copeland is one of the few human beings who already has a working interface. He broke his spine in a car accident and is paralyzed from the chest down.

In contrast to Neuralink’s prototype, which connects to the brain through dozens of thin wires and is meant to eventually be small enough to sit inside the skull and transmit wirelessly, Copeland’s consists of four spiky silicon electrode pads in his brain (called Utah arrays), connected to the outside world through sockets atop his head. They let him control robots and computers, and they have sensations sent back into his brain.

Since 2014 Copeland has been part of a research project at the University of Pittsburgh led by researchers Michael Boninger and Andrew Schwartz. We interviewed him about Neuralink’s news.

What do you think of Elon Musk’s plans for a brain-computer interface?
Well, it’s pretty cool. It seemed like maybe it will work the way they want down the road, but it probably doesn’t work that way now. A couple of years ago, when I heard he was working with a neural interface, I said I would be there in a heartbeat. I was joking, but it’s interesting to think about what I am going to do when I get explanted. I am coming up on my five years. Then the FDA says my implants may have to come out. Neuralink talked about longevity of the implant and also a large number of electrodes. I always say I wish they had put more electrodes into me.

Why do you wish they’d put in more electrodes?
Basically, the more electrodes you have, the more neurons you record from, so I would imagine higher-degree tasks would be easier. I am limited to thinking about my right arm and hand. I thought it would be good to have more control. I always want to play more video games.

What was your job before the accident?
I was going to school at Penn State, Fayette, for nanofabrication, so I didn’t have a job, I was in school.

Do you consider having a brain implant a job?
Ha ha. Yes, and I wish the government did, too. But that is a whole rant about disability and stuff. I spend 12 hours a week at the lab doing testing, and I drive an hour each way. I have a monthly compensation, plus mileage and tolls.

What’s your job title?
Ooh. Research participant? “BCI [brain-computer interface] pioneer” is what Blackrock calls us. Blackrock is the company that makes the Utah arrays, which I have four of.

What does it feel like to be able to control things with your mind?
Ooh. Very cool. When you have an accident like mine, and you are limited to what you can do, and limited in what you can interact with in your environment, doing something like this is very cool and very rewarding, even if there are no health benefits.

What’s your favorite thing to do with the interface?
I like playing video games. So far, I play Sonic Hedgehog 2 mostly. I really want to play Final Fantasy XIV, and I have played Pac-Man Championship Edition DX. Usually I just let them do the regular beneficial science stuff, though.

What would you do if you had Elon Musk’s brain implant?
I would play games with it. Honestly, that is what I would do. I used to love playing video games and I can’t at the same level anymore.

You have implants that convey the sense of touch to your brain. What does that feel like?
I have two implants in the somatosensory cortex. The sensations really depend—they range from pressure, tingling, warmth, vibration, sometimes tapping. The sensations are at the base of my fingers, near my palms, or the knuckle.

Does it feel real?
Yes and no. Some of them, like pressure and tapping, are pretty close to the natural real-world analogue. The tingles are not unnatural, but they have less obvious comparisons to sensations I would have felt before my accident. But now it’s second nature; they are natural to me at this point.

Do you consider yourself a cyborg?
In the broadest sense, yes, but that is mostly because I like saying nerdy things. I have a YouTube playlist called My Cyborg Adventure.

[Editor’s note: here’s a video from Copeland’s playlist of him using a robotic arm to eat a taco.]

How often do you use the implant, and what do you do?
Since I do have the sensory implants, there are five or six people designing tasks and collecting data. I will also do tasks that only use the robot. Right now, I am doing one task reaching for an object. Then there are sensory-only tasks—they will stimulate every electrode one at a time at 60 microamps, and I will tell them what it feels like. Then there are a whole lot of virtual tasks, where I will grab things and use different force levels, so it can decode more accurately how hard I am trying to grab.

What robot do you control?
It’s a KUKA LBR assembly robot. It’s my favorite robot so far. It’s basically the kind of robot that builds cars. First I used the APL Arm, then the Luke arm from DEKA, and those have a limitation because they are meant to be anatomical—they can only reach how an arm can. That is not a limit that I should have. The Kuka has a lot of articulation. If I think up, it can move up and keep the arm parallel to the ground. It’s a lot faster. I like it.

What can you do with the robot? Can you pick up a ball?
I can pick up a tennis ball for sure. It has a gripper. I pick up and move things across a table as many times as I can in two minutes. I broke my own record. I have pretty awesome control of it.

Do you use the brain interface at home?
Not yet, but they are getting approvals for me to use it at home with a tablet. It’s a medical tablet, so it’s not as powerful as I would like it to be. It’s not the latest stuff—it doesn’t have a lot of processing power. But it would be fun to play around with it on my own on my free days.

Would you sign up to get Elon’s implant?
That is a hard one to really answer. It’s a yes and no. I would have to have a pretty in-depth discussion with him or his team to see what is going on. I know that it is easy to show something off as fancier than it is, or more ready for prime time than it is. When I signed up, I was the first human to have implants in the sensory cortex, but I was not the first to have the Utah array; it had been tested before. There are about 20 of us so far, I think.

What motivates people to join a study and get an experimental brain implant?
Me? To help push the technology so it is commonplace enough to really help people out, so they don’t go through the things that I went through. The depression and the feeling that you can’t do anything anymore and can’t contribute to society—it’s just despair.

Joining this study has given me a sense of purpose. Someone needs to do it, and I am not really doing much else. I hope it gets to the point where if you have an injury and insurance will pay for it, you can get back functions, maybe functions that you could never have had before.

How risky do you think getting a brain-computer interface is?
I am assuming there is going to be considerably more risk with Neuralink. If you are comparison shopping for brain implants, I think the Utah array is less risky. I do have pedestals on top of my head, and I have to worry about keeping it clean, and the skin receding. A wireless one would be less risky in that way. But the way their [Neuralink’s] electrodes go in, they are hair-width, and there are a lot of them. If something went wrong, and you needed to get it explanted, that could be really tricky.

What do you think of Elon Musk?
I always think the stuff he is doing is pretty cool. Well, really cool. I would like to go to space, and I would like to have a Tesla wheelchair van.

He’s saying people should get voluntary brain implants. What do you think of that?
Honestly, I would have wanted one before my injury. I understand why they can’t just start at that point, but I think that it would be a cool place to end up in the future. Right now, I think paralyzed people are basically the test pilots. The FDA doesn’t want to see stuff put in someone’s head who is able bodied, because jamming electrodes in your motor cortex, you could lose function. So starting with people who lost function already is the jumping-off point. It’s a technology that could be a huge help, for a broad degree of different conditions, and could allow for new things.

What got your attention most during the Neuralink presentation?
I thought it was really cool, and for a moment there I was maybe kind of jealous of the person that ends up with one of these things, assuming it works, and gets to do all the cool stuff and be the new rock star of the BCI world. If it all ends up working out, it’s going to definitely change the world and how we think about these things.

Blackrock Microsystems, based in Salt Lake City, Utah, was founded in 2008 and is the world’s leading provider of technology in the neuroscience, neural engineering, and neural prosthetics space. The company’s technology is at the core of worldwide innovations in Brain-Machine Interfaces (BMI/BCI), implantable bionic technologies and epilepsy diagnostics. Most impactful implantations of the Utah Array have been in some tetraplegic individuals from University of Pittsburgh’s Nathan Copeland, who controlled a prosthetic arm to fist bump US President Barack Obama in 2016; Ohio State University’s Ian Burkhart who is learning to control an automobile, and CalTech’s Nancy Smith who is learning to play a virtual piano. Seemingly easy tasks, all have used the Utah Array to translate their thoughts into action to restore function.