By Sarah Murray for the Financial Times 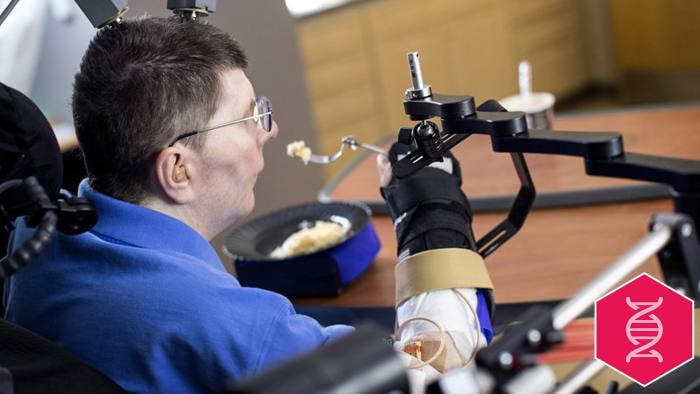 The ability to move an object using brainpower alone might seem like the stuff of science fiction but scientists are making progress in developing brain implants that could enable human thought, via a computer, to control wheelchairs, robotic prosthetics and paralysed limbs.

In a clinical trial of the technology last year, Bill Kochevar, paralysed from the shoulders down after a cycling accident damaged his spinal cord, was able to reach and grasp using his own arm and hand.

Behind the proof-of-concept demonstration was BrainGate, a project in which scientists from a number of universities are exploring how brain-computer interface (BCI) technologies could help people with neurological diseases, injuries or limb losses to move and communicate again.

BCI technology works in two ways. Electrodes implanted in the brain record the activity of individual neurons while algorithms “decode” them in real time to find out which are active when a person makes different body movements, whether clenching a fist or raising an arm.

Then a system of electrical pulses, known as functional electrical stimulation, translates that information into command signals for a robotic or paralysed limb.

This combined technology was what allowed Mr Kochevar to grasp a cup of coffee, hold a fork to feed himself and bring his hand to his face to scratch his nose, says Bolu Ajiboye, assistant professor of biomedical engineering at Case Western Reserve University and part of the BrainGate project. 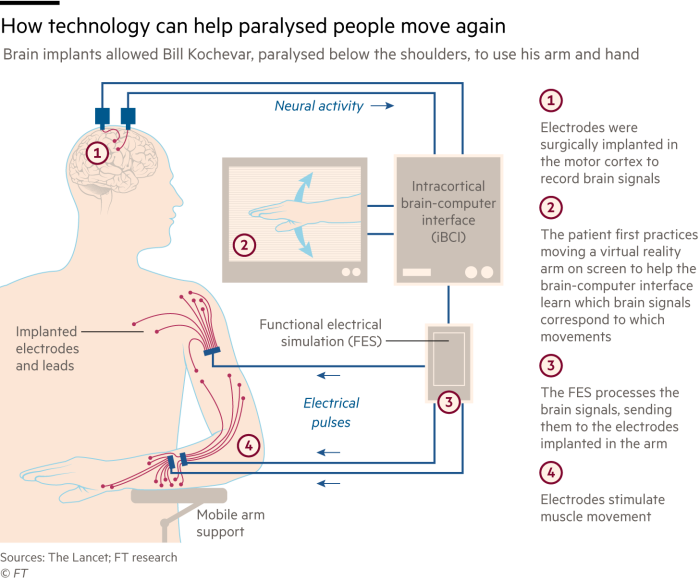 The BrainGate scientists are not alone in seeing the potential of these technologies. Last year, Niels Birbaumer, a neuropsychologist from the University of Tübingen, demonstrated that totally paralysed patients in a completely locked-in state could give simple yes or no answers using BCI technology.

At the University of Pittsburgh, scientists at the Rehab Neural Engineering Labs are not only investigating the potential for BCI technologies to control robotic arms but are also exploring how sensors attached to brain-controlled prosthetics might allow people to feel what they are touching.

In many cases, even though injury or disease has left people without their limbs or unable to move them, the brain functions responsible for movement remain intact.

“Because someone has had a spinal injury or an amputation that doesn’t mean the brain loses its capacity to understand what a limb is, to feel it or even control it,” says Robert Gaunt, assistant professor of physical medicine and rehabilitation at the University of Pittsburgh.

By asking a person to imagine moving their limbs in different ways, it is possible to identify the neurons activated for each movement, he says. “Based on that understanding we can translate that into command signals for a robotic limb.”

“The hope of many people is that to some extent it won’t matter if we can’t decode the information perfectly. What’s important is that the user and the brain itself can learn to control the thing we’ve wired it up to.”
ANDREW JACKSON, PROFESSOR OF NEURAL INTERFACES AT NEWCASTLE UNIVERSITY

Despite the excitement surrounding the next generation of neural prosthetics, much work needs to be done before successes in the laboratory can be replicated in the real world — particularly since, for now, brain implants must be physically connected to the computers decoding brain activity and sending out command signals.

However, most agree that it is a matter of time before devices become wireless, smaller and more portable. “It’s an engineering problem that people are working on and is solvable,” says Prof Ajiboye.

More problematic is the fact that the brain contains billions of neurons so implanting a few electrodes is insufficient to capture the full range of movements it controls. “Scaling technologies to be able to look at larger numbers of neurons and making technologies that are reliable over decades is challenging,” says Timothy Constandinou, reader in neural microsystems at Imperial College London.

Nevertheless, some think that the brain — an extremely sophisticated organ, capable of taking on new tasks from learning to drive to playing a musical instrument — may be able to adapt.

“The hope of many people is that to some extent it won’t matter if we can’t decode the information perfectly,” says Andrew Jackson, professor of neural interfaces at Newcastle University. “What’s important is that the user and the brain itself can learn to control the thing we’ve wired it up to.”

Some worry about the potential for “brainhacking”. In an article in Science last year, University of Tübingen researchers recommended that BCI data be encrypted and stored in something similar to an aircraft’s black box. They also said a veto function should be available so that doctors or the patient could stop any attempted misuse of the technologies by malicious individuals.

However, Prof Gaunt believes that by the time BCI technologies are widely usable, the systems now being developed to protect implantable devices such as pacemakers could be used.

“If you have a wireless interface from the brain controlling a robotic arm, you can worry about security,” he says. “But when our field gets to that point, we’ll be able to leverage many of the ways people have learnt to deal with that.”