A Brain-Computer Interface That Works Wirelessly

A wireless transmitter could give paralyzed people a practical way to control TVs, computers, or wheelchairs with their thoughts. 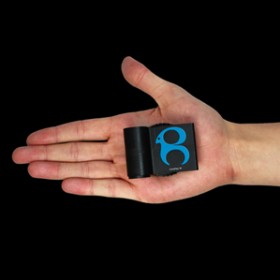 A few paralyzed patients could soon be using a wireless brain-computer interface able to stream their thought commands as quickly as a home Internet connection.

After more than a decade of engineering work, researchers at Brown University and a Utah company, Blackrock Microsystems, have commercialized a wireless device that can be attached to a person’s skull and transmit via radio thought commands collected from a brain implant. Blackrock says it will seek clearance for the system from the U.S. Food and Drug Administration, so that the mental remote control can be tested in volunteers, possibly as soon as this year.

The device was developed by a consortium, called BrainGate, which is based at Brown and was among the first to place implants in the brains of paralyzed people and show that electrical signals emitted by neurons inside the cortex could be recorded, then used to steer a wheelchair or direct a robotic arm (see “Implanting Hope”).

A major limit to these provocative experiments has been that patients can only use the prosthetic with the help of a crew of laboratory assistants. The brain signals are collected through a cable screwed into a port on their skull, then fed along wires to a bulky rack of signal processors. “Using this in the home setting is inconceivable or impractical when you are tethered to a bunch of electronics,” says Arto Nurmikko, the Brown professor of engineering who led the design and fabrication of the wireless system.

The new interface does away with much of that wiring by processing brain data inside a device about the size of an automobile gas cap. It is attached to the skull and wired to electrodes inside the brain. Inside the device is a processor to amplify the faint electrical spikes emitted by neurons, circuits to digitize the information, and a radio to beam it a distance of a few meters to a receiver. There, the information is available as a control signal; say to move a cursor across a computer screen.

The device transmits data out of the brain at rate of 48 megabits per second, about as fast as a residential Internet connection, says Nurmikko. It uses about 30 milliwatts of power—a fraction of what a smartphone uses—and is powered by a battery.

Scientists have prototyped wireless brain-computer interfaces before, and some simpler transmitters have been sold for animal research. “But there’s just no such thing as a device that has this many inputs and spits out megabits and megabits of data. It’s fundamentally a new kind of device,” says Cindy Chestek, an assistant professor of biomedical engineering at the University of Michigan.

Although the implant can transmit the equivalent of about 200 DVDs’ worth of data a day, that’s not much information compared to what the brain generates in executing even the simplest movement. Of the billions of neurons in the human cortex, scientists have never directly measured more than 200 or so simultaneously. “You and I are using our brains as petabyte machines,” says Nurmikko. “By that standard, 100 megabits per second is going to look very modest.”

Blackrock has begun selling the wireless processor, which it calls “Cereplex-W” and costs about $15,000, to research labs that study primates. Tests in humans could happen quickly, says Florian Solzbacher, a University of Utah professor who is the owner and president of Blackrock. The Brown scientists have plans to try it on paralyzed patients, but haven’t yet done so.

Currently, a half dozen or so paralyzed people, including some in the late stages of ALS, are taking part in BrainGate trials using the older technology. In those studies, underway in Boston and California, the implant that makes contact with the brain is a small array of needle-like electrodes carved from silicon. Also sold by Blackrock, it is commonly called the Utah array. To establish a brain-machine interface, that array is pushed into the tissue of the cerebral motor cortex, where its tips record the firing patterns from 100 neurons or more at once.

Those tiny blasts of electricity, scientists have found, can be decoded into a fairly precise readout of what movement an animal, or a person, is intending. Decoding those signals has permitted hundreds of monkeys, as well as a growing number of paralyzed volunteers, to control a computer mouse, or manipulate objects with a robotic arm, sometimes with surprising dexterity (see “The Thought Experiment”).

But the BrainGate technology will never turn into actual medicine until it’s greatly simplified and made more reliable. The head-mounted wireless module is a step toward that goal. Eventually, scientists say, all the electronics will have to be implanted completely inside the body, with no wires reaching through the skin, since that can lead to infections. Last year, the Brown researchers reported testing a prototype of a fully implanted interface, with the electronics housed inside a titanium can that can be sealed under the scalp. That device is not yet commercialized.

“If they could put it in under the skin, then everything you see in the videos could be done at home,” says Chestek, referring to films of patients using mental control to move robotic arms. “That wire going through the skin is the most dangerous part of the system.”